Lebanon was founded by two young, prominent, Indianapolis men, General James Perry Drake and Colonel George L. Kinnard. Their military titles were derived from their service in the Indiana Militia. Both men, in addition to being progressive community builders were shrewd developers and speculators.

Drake and Kinnard learned early of the planned organization of Boone County and purchased three tracts of land near the geographic center of the new county. The two men knew that this location would be the most likely site for the new county seat and, therefore, would develop as a town. According to Federal Land office records in Crawfordsville, on March 1, 1830, Drake and Kinnard applied for deeds to the land. It is believed that the purchase price was $1.25, per acre, the going rate for property in the area. 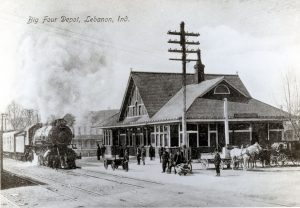 With the land acquired, it is reasonable to assume that the two men set about platting a town. This “Original Plat” consisted of over 19 blocks surrounding the public square. To ensure that the town would flourish, Kinnard, as Marion County surveyor, surveyed a road from Indianapolis to Lafayette. This road as it lead northwest from Indianapolis through the wilderness would have passed to the west of Lebanon had it not been for an expedient eight block jog to Main St. before continuing on to Lafayette.

To ensure that their property would be selected as the county seat, Drake and Kinnard donated every third lot, the town square, and forty acres of additional adjacent land to the county. In addition, they furnished at no cost the bricks and shingles for the original courthouse. County commissioners readily agreed to this bargain.

The honor of naming the town fell on Adam French, one of the first commissioners. Because a cluster of hickory trees reminded him of the Cedars of Lebanon from the Bible, French shouted to a group of onlookers, “The name of this town shall be Lebanon.”

In 1839, a two story brick courthouse was built. Until that time, the Boone County Circuit Court met in two different log structures. In 1856, the foundations of the courthouse began to crumble so the building was replaced with a larger more stately brick building costing $40,000. During the construction of this new courthouse valuable records from the recorder’s were destroyed in a fire.

Features of interest in the courthouse include: 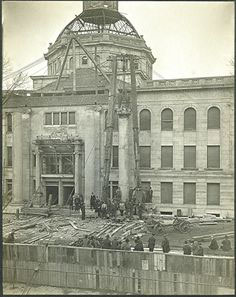 The large columns on the north and south entrances are believed to be the largest monolithic limestone columns in the world.

The magnificent courthouse dome is the second largest stained glass dome in Indiana.