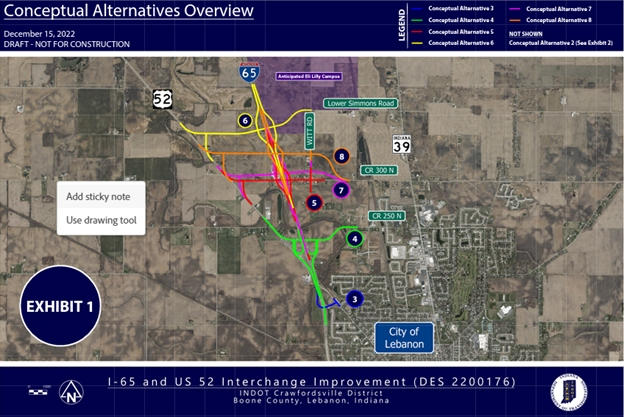 From the Indiana Department of Transportation:

The Indiana Department of Transportation (INDOT) and Federal Highway Administration (FHWA) intend to proceed with the I-65 and US 52 Interchange Improvement Project (Des. No. 2200176) in Boone County, Indiana. The proposed undertaking is located at the I-65/US 52 Interchange in Lebanon, Boone County, Indiana. The study area for the proposed project extends approximately 1.72 miles north and 0.45 mile south along I-65 from the I-65/US 52 interchange and is generally bound by US 52 to the west (approximately 0.60 mile west of I-65) and SR 39 to the east (approximately 1.40 miles east of I-65).

The need for the proposed project is evidenced by the lack of access due to the partial I-65/US 52 interchange that only provides I-65 northbound to US 52 northbound access and US 52 southbound to I-65 southbound access. I-65 traffic must use the SR 47 and SR 32 interchanges to reach the areas east and west of I-65 near the US 52 interchange, as well as less direct routes through low-speed residential areas and downtown Lebanon. Additionally, increased traffic congestion is expected due to the anticipated 7,000-acre LEAP Innovation and Research District being developed east and west of I-65 (north of Lebanon) that is anticipated to be a large traffic generator and includes the Eli Lilly and Company campus that is anticipated to be constructed by 2025. Due to the increased traffic congestion, the I-65/US 52 interchange under existing conditions is expected to operate at a level of service (LOS) F (unacceptable) in the 2045 (design year) AM peak hour. LOS is a scale (A through F) that classifies the operating conditions of roads. In general, the operating conditions of roads are considered acceptable in urban areas if found to operate at LOS D or better.

Project information from The Lebanon Reporter