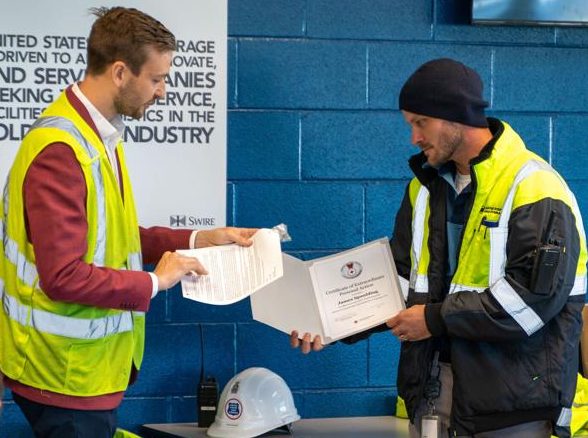 James Spaulding was getting ready to start his shift at the U.S. Cold Storage facility in the Lebanon Business Park a little over a month ago when he heard from another co-worker that Brian Ramirez getting dizzy and blacking out before a pre-shift meeting.

As he lost consciousness, Ramirez fell to the ground, hit his head on the break room floor, and began convulsing. Spaulding attempted to find his pulse — and couldn’t.

“I noticed that he was faintly breathing,” Spaulding said. “So I took my gear off, told someone to call 911 and then started to pull back Ramirez’ gear and began chest compressions.”

Employees at USCS wear winter clothes during their shifts as the facility is a large freezer.

Once Spaulding began chest compressions, Ramirez went in and out of consciousness one more time before paramedics arrived, Spaulding said.

Spaulding said he was initially CPR trained during his time with the U.S. Marine Corps. when he was stationed at the Air Force base in Kandahar, Afghanistan.

“Everybody should definitely get CPR trained,” Spaulding said. “Anybody in any sort of leadership role or any role should be trained. I even got infant CPR trained when I had my first kid, just to be safe.”