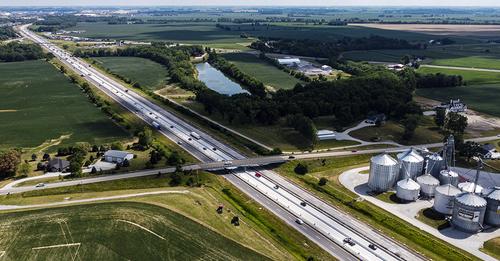 The Lebanon City Council on Monday night(7/11/22) voted 6-1 to approve the voluntary annexation of land belonging to nearly three dozen rural Boone County property owners in an area where state officials are pushing ahead with plans for an expansive, high-tech business park.

About 32 individuals and companies who own more than 1,400 acres over 56 parcels submitted petitions last month to have their properties added to the city of Lebanon.

The land is included in an area of Boone County in which the Indiana Economic Development Corp.—the state’s economic development arm—is planning the LEAP Lebanon Innovation and Research District.

LEAP stands for “limitless exploration/advanced pace,” as the state plans to use the rural Boone County site to attract companies in the advanced manufacturing, research and development, life sciences, technology, and microelectronics and semiconductor industries.

As of mid-June, the IEDC had about 6,000 total acres under contract for the development, a venture it has been working on since last year.

In May, the state announced pharmaceutical giant Eli Lilly and Co. would anchor the northern portion of LEAP, spending $2.1 billion on two new manufacturing facilities. The company plans to use about 600 acres of land just east of Interstate 65.

The state plans to surround the Lilly facilities with suppliers and other tech-driven firms, while the southern area of the development would have headquarters, research and development facilities and advanced manufacturing.

The Indiana Department of Transportation is also developing plans in the area for a new I-65 interchange at West County Road 300 North.

The individual parcels considered for annexation ranged from as little as 0.8 acres to nearly 157 acres, and they together account for about 1,459 acres. About two-thirds of the property is owned by four companies and families and their affiliates.

The property owners asked Lebanon to rezone the acreage to a general industrial classification, along with the request that the land be incorporated into the city.

The city pursued annexation on a voluntary basis. However, the plan to annex property also drew an outcry from some Boone County residents who spoke at Monday’s council meeting and at previous public meetings.

While some residents on Monday expressed displeasure at the loss of farmland and a rural way of life, others questioned how long manufacturing plants would stay in Boone County, citing the loss of automotive and steel-making facilities in other areas of Indiana.

“The project and others like it leave a path of destruction,” Britt Reese said. “It destroys the quality of life and what some have worked their lives for. It destroys what gives us our identity. It destroys what has kept those who have stayed. The state is trying to plug a hole with a square peg.”

Annexation generally allows cities to incorporate growing areas into their boundaries, giving them more control over future users for parcels when developers pursue redevelopment. It also adds to a municipality’s tax base.

The property considered at Monday’s meeting represented the first portion the state plans to develop through the LEAP district, for which the IEDC could deploy new incentive tools tied to specially designated innovation districts.