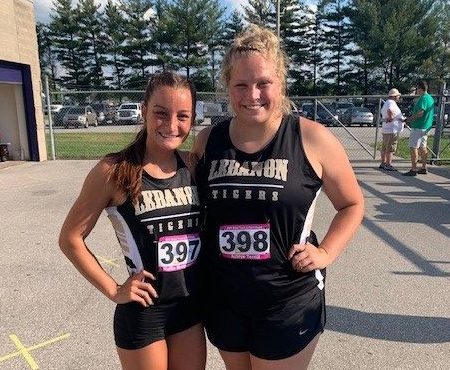 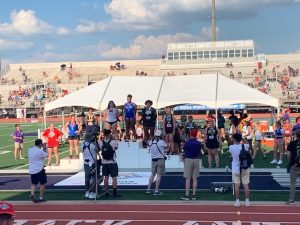 INDIANAPOLIS – For the first time in school history, the Lebanon girls track and field team had someone on the podium at the IHSAA State Finals. Senior Ashlyn Terrill accomplished the feat on Saturday, placing ninth in the discus with a throw 123-feet-6-inches. “I was definitely really excited,” Terrill said. “Going in, I was the underdog and I knew I had nothing to lose. I was happy that I reached my goals and excelled in what I wanted to do.” Terrill said she found out after she was done on Saturday that she was the first Tiger to make the podium on the girls side. She said knowing that she was the first Lebanon athlete in the 47-year history of the girls state meet to score was a special feeling. “That is really special to me,” Terrill said. “Having that accomplishment is even more than I could have asked for. It blows my mind that it was even possible and I am happy I could do it.” In the state finals, the athletes are flighted based on their regional throws. Coming in, Terrill was seeded 11th, so she was in flight 2. Needing a big throw in her first three, Terrill was able to deliver, throwing her best distance on her first throw to make the finals. She wasn’t able to better her mark in her final three throws, but her throw was good enough for ninth. Terrill then went to the shot put, where she placed 12th in 38-feet-9.50-inches. She got better on all three of her throws, going 37-02.25, then 37-11.50 then her final throw, but was about a foot and a half short of making the finals. “I wasn’t totally happy with the distances,” Terrill said. “I thought I could do better, but it doesn’t always go your way.” The podium finish capped a fantastic season for Terrill. She won the Sagamore Conference and sectional champion in both the shot and disc, then was runner-up in both events at the regional. She is the school record holder in both events. “My coach Erin Huse really helped him this year,” Terrill said. “She has really helped me flourish this year. I was really happy with everything I accomplished. It’s been awesome and I am really grateful.”

She was a six-time Sagamore Conference champion, and improved every year in the post-season. After not making it out of the sectional as a freshmen, she was a double regional qualifier as a sophomore but couldn’t make it to state. After missing last year, she made this year count. ”Each year she matured,” Lebanon head coach Shelley West said. “She got stronger mentally and physically, and worked hard in the off-season. She continued to push forward and got her goal of making it to state.” Along with Terrill, classmate Hallie Montgomery competed in the 200-meter dash on Saturday. She placed 12th in a time of 26.19.