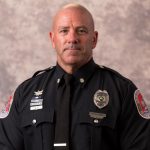 Lebanon Police Department would like to announce the Promotion of Tony Bayles to the position of Assistant Chief. Newly appointed Asst. Chief Bayles has been with the Lebanon Police