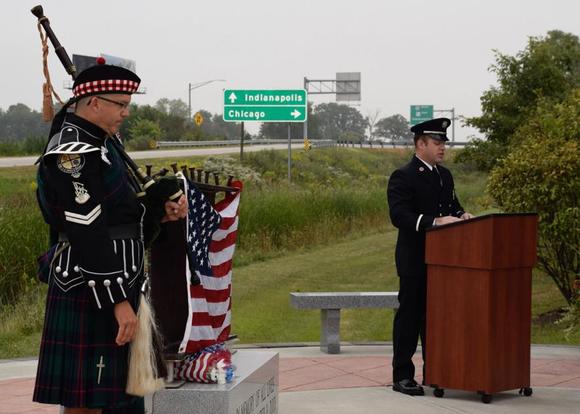 COVID-19 may have affected the Lebanon Fire Department’s 9/11 Memorial Service, but nothing could dampen the city’s desire to honor those whose lives were forever altered on September 11th, 2001. The service this year was published via Facebook Live, and featured remarks from Lebanon Fire Department Lieutenant Jason Adams, and the bagpipe playing of Troy Clements with the Pike Township Fire Department.

Good morning.  My name is Lt. Jason Adams and I’d like to welcome you to the annual 9/11 Memorial Service hosted by the Lebanon Fire Department.  We are live from the 9/11 Beam Memorial at Lebanon Station 11.  Unfortunately, due to the ongoing COVID-19 pandemic the department made the difficult decision to cancel the event in person this year.  However, we’d like to take time this morning move ahead in an online format, to acknowledge and memorialize those who lost their lives in the terrorist attack on September 11th, 2001.

September 11th, 2001 began like most other days with people getting up, heading to work, and going about their general business.  By the end of the day, we now know countless lives would be changed forever.  At 8:46 AM, an AA Flight 11 was reported as having crashed into the north tower of the World Trade Center in New York City.  Initially many believed this to be a horrible accident and news crews began reporting on the incident.  However, at 9:02 AM, with the world watching United Airlines Flight 175 struck the south tower.  It was immediately apparent at this time that these incidents were no accident and that the United States was under attack.  As more questions were raised than answers and emergency crews responded to the scene in an effort to assist in any way possible, additional attacks were reported as American Airlines Flight 77 was crashed into the Pentagon at 9:37 AM and United Airlines Flight 93 crashed into a field in rural Somerset County, Pennsylvania at 10:03 AM.  Throughout all of this responders continued to flood to these scenes, attempting to assist while not knowing what they were walking in to.  Many police officers and firefighters not on duty made their way to these sites just to provide more manpower in a situation that they realized was in desperate need of it.  The south tower collapsed at 9:59 AM, injuring, trapping, and killing many of those in the tower at the time of the attack and those who responded to assist less than an hour after it had been struck.  Even with the chaos going on around them, more people then flooded into the area, knowing that the second tower could collapse at any time, in an effort to help those in need.  These acts convey the seriousness of which those on scene took their oaths to protect and serve, as many likely realized that they could be killed if the second tower fell.  The north tower collapsed at 10:28 AM, one hour and 42 minutes after impact.

Crews worked for months to rescue and recover those trapped in the debris, and while stories of perseverance and survival were reported as they happened, sadly, many more perished in the aftermath of the attacks.  When all was done 2,977 were reported killed in the attacks including 343 firefighters, 23 police officers, 37 Port Authority officers, 184 people at the Pentagon, and 40 passengers and crew on United Airlines Flight 11 who selflessly sacrificed themselves in a successful effort to down the airplane both it reached its intended target.

Today, Lt Troy Clements of the Pike Township Fire Department and the Indianapolis Pipes and Drums is with us to honor and remember all those who perished in these horrendous attacks.  Following a moment of silence Lt Clements will be playing  Amazing Grace in memory of the attacks on September 11th, 2001.

Please join me in a moment of silence at this time.

I’d like to thank Lt Clements for joining us today.  It’s an honor to have you here helping to keep this somber but important tradition alive even in difficult circumstances.

Thank you everyone watching today, and the video will be posted for anyone unable to watch live this morning.  We hope to be able to welcome everyone back for our service in person next year.  The 9/11 Memorial is open for visiting at this time, however we ask that you maintain social distancing and health department guidelines to the best of your ability while here.  Have a great day.