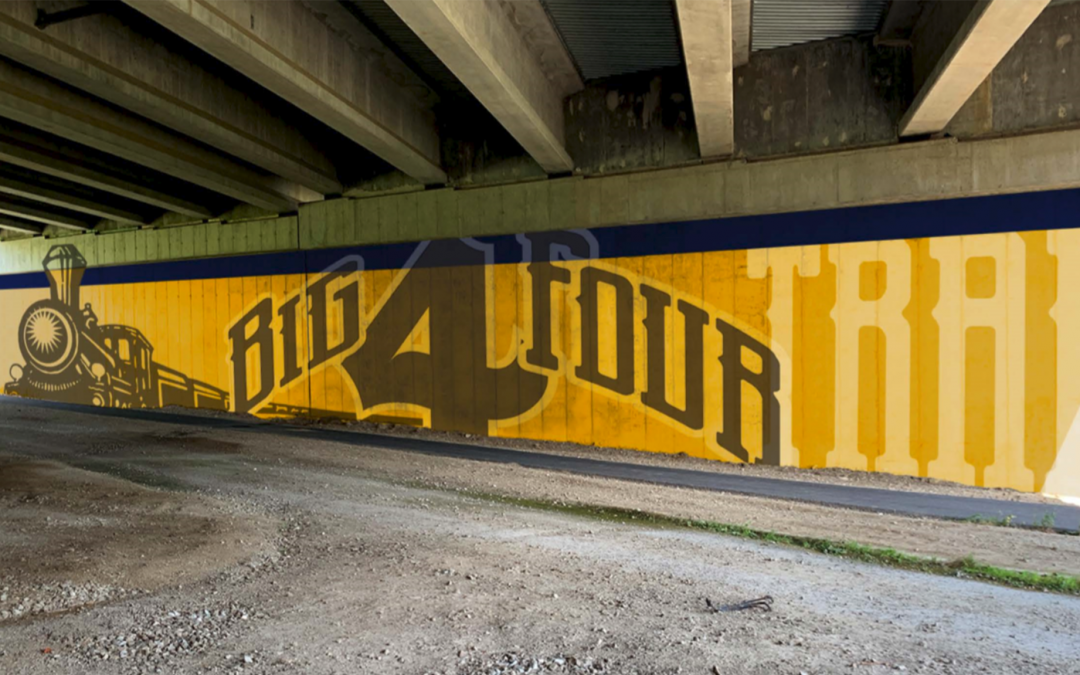 Lebanon, Ind., June 30, 2020– 131 years to the day the Big 4 rail line was formed, the City of Lebanon has announced the I-65 overpass along Lebanon’s Big 4 Rail Trail is moving forward. A Train-themed mural will soon occupy both sides of the multi use path, replacing the less than desirable tagging that currently occupies that stretch of the trail. Each side of The Big 4 Trail mural is approximately 130 feet wide and 10 feet tall.

“We wanted to replace a negative, with a positive,” said Mayor Matt Gentry. “That stretch of the trail is extremely popular, seen by dozens of daily visitors. Foul language and other negative markings have no place in our city, let alone on an outstanding quality of life amenity like the Big 4 Trail.”

The mural will serve as one of the accent pieces for the city’s main trailhead, located along Sam Ralston Road. Prep work on the mural portion of the overpass is slated to begin on July 6th, with painting to start on July 9th. The tentative completion date for the artwork is August 10th. The City of Lebanon is teaming up with Signworks, Inc. to perform the mural work. The company’s founder, Andy Chapman, grew up in Lebanon and continues to have strong ties to the community.

“Our intent was to respectfully merge the City of Lebanon and Big 4 Trail brands to create a timeless image, while paying homage to the history of the railroad, using historic typefaces and lettering styles,” said Signworks President and Senior Creative Director Andy Chapman. “Our goal is to create a high-impact public art piece that can be enjoyed for years to come.”

The City of Lebanon applied for, and was granted permission from the Indiana Department of Transportation to add the artistic accent to the I-65 overpass. INDOT’s statewide set of standards must be adhered to in order to perform the beautification, without compromising the structural integrity of the bridge. As part of the process, security measures will be taken to ensure longevity of the Big 4 Trail mural’s design and intent. The mural is an initiative of the Community Development department, which is funded by statewide gambling revenues.

About the Big 4: Formed on June 30th, 1889. Also referred to as the Cleveland, Cincinnati, Chicago, and St. Louis Railway. Its main routes traveled through Indiana, Illinois, Michigan, and Ohio.